Zachary „Zack“, (Michael Rapaport) is an eighteen year old introverted Jewish DJ and rapper, who lives with his chauvinistic father Richard (Ray Sharkey), who runs a record store specializing in blues and jazz music. Zack’s mother died when he was very young. Zack’s best childhood friend is a young black man named Dee (DeShonn Castle), who along with Zack is also a rapper, and the both of them record music together. Zack works part time at an Italian restaurant. In Zack’s neighborhood, there is an eccentric man named Dominic (Kevin Corrigan) who is a pyromaniac that lives on land adjacent to an industrial power plant.
One day at school, Zack gets into a quarrel with his girlfriend Michelle (Shula Van Buren), and the both of them separate from each other. During this fight, he sees a new transfer student who just moved from New York, a black woman named Nicole „Nikki“ (N’Bushe Wright). Nikki incidentally, is Dee’s cousin. Zack immediately begins to infatuate over Nikki, (which she is also in his History class) despite never talking to her.
One night, Zack comes over for dinner at Dee’s house. Zack confides in Dee that he is attracted to Nikki, to which the fact him being a white man, and she being a black woman, he feels scared to proceed. Dee tells Zack that he shouldn’t be concerned over that, however Dee’s father warns Zack that he might receive negativity from this. Zack then decides to finally introduce himself to Nikki, although not fully disclosing his full feelings towards her. [Wikipedia] 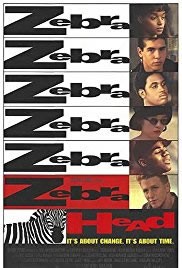