A grim and graphically raw drama about life (and often death) in an experimental prison ward called Emerald City at the Oswald State Correctional Facility (nicknamed Oz). It was alternately praised and criticized for its profane language and extreme violence, but creator Tom Fontana’s uncompromising study of men and women behind bars—staffers as well as prisoners—is compellingly written and performed.

Character:
Prisoner #96C382. Convicted December 12, 1996 – One count of murder in the first degree, assault with a deadly weapon. Sentence: Life imprisonment without the possibility of parole.
The epitome of a macho Italian gangster, Ortolani is bitter, homophobic and hotheaded. He is also the nephew of Nino Schibetta and the cousin of Peter Schibetta. He is in prison for shooting and nearly killing Ryan O’Reily as well as murdering another Irish gangster in the process.

Season 1:
Ortolani runs the kitchen for Italian mafioso Nino Schibetta.He dislikes the black inmates, unconcerned with the fact that they constitute the majority of the kitchen staff. He is disliked and feared by most of the staff and inmates, although because of his toughness and undisguised racism he is somewhat admired by Aryan Brotherhood leader Vernon Schillinger (the feeling is not mutual). When Ortolani learns that Ryan O’Reily is alive and coming to Oz, he schemes to have his old enemy killed (and later almost succeeds in drowning O’Reily in one of the bathroom toilets before his conscience gets the better of him). Ortolani nearly cripples a gay inmate, Billie Keane, who flirted with him in the shower.This enrages Billie’s brother,Jefferson Keane, the leader of the Homeboys gang, who plots to kill Ortolani in retaliation. Tim McManus lets Ortolani know that every prisoner and guard in Oz hates him or is scared of him (or both),
something he does not seem to mind. So, as punishment for beating up
Billie he sends him to work in the AIDS ward,hoping to teach him a lesson in tolerance. While he serves time in the AIDS ward, Ortolani develops an infatuation for Dr. Gloria Nathan. Although Ortolani is initially appalled by the AIDS patients, he begins to like one of them, Emilio Sanchez.Sanchez eventually asks Ortolani to help him die and end his suffering. Ortolani doesn’t agree immediately, but returns later to do as Sanchez asked him.He disconnects Sanchez from his life support and smothers him. McManus and Nathan throw him into isolation ward and have him drugged. Keane then gives the order to Johnny Post and O’Reily to kill him. O’Reily uses his connections to allow Post entry to the hole, and Post then pours flammable liquid onto the drugged and restrained Ortolani and sets him on fire, burning him to  death.Ortolani is portrayed as a callous, hotheaded bigot, but he occasionally revealed some positive characteristics. Throughout the
episode, Ortolani is seen to feel some admiration for new inmate Kareem
Said, whom he watches during his lectures to the Muslim inmates. Ortolani tells Said, „It’s too bad you’re of the wrong color,“ before taking off. He is also forced to sponsor new inmate, Tobias Beecher whom he takes no interest in, but gives some advice about surviving in prison. Ortolani is shown to care very much for his children and tells his wife Ginny that he does not want them around in Oz. He also cares for his wife but has difficulty in expressing it. During his interrogation, inmate Bob Rebadow says that God told him that Ortolani wanted to kill himself for being in prison for the rest of his life, away from his wife and kids. By smothering Sanchez and allowing himself to be placed in the hole, he knew this would happen. He makes his second appearance in the final episode of season one in a brief hallucination by McManus during the riot.
[Wikipedia]

In the sixth and final season, Ortolani’s spirit co-narrates the episode #54, „A Day in the Death“. [Wikipedia] 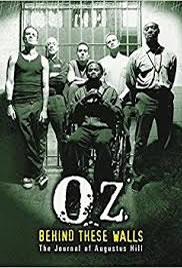