Retired police lieutenant Al Giardello is running for mayor on a platform of drug legalization and seems to be the front-runner when he is suddenly shot at a press conference, by an unseen gunman. Unconscious, he is rushed to the hospital. In a montage sequence, each of the detectives who used to work for him during the show’s 7-year run learns of the shooting and rushes to the squad room. While some of the detectives are still working Homicide, most have either quit the force, retired, or transferred to other departments. Particular attention is paid to Frank Pembleton, who is now working as a college professor and Mike Giardello, who has quit the FBI and is now working as a uniformed officer.

At the squad room, all of the detectives, past and present, clamor for an opportunity to help find the shooter. There they find that Stuart Gharty is now shift commander, despite his complete lack of either qualification or leadership. Captain Roger Gaffney, who has previously shown overt signs of racism and has a particular dislike of Pembleton, allows all of the white former detectives to aid in the investigation but forbids Pembleton from participating. When Pembleton tells Gharty he has never respected him but finds his behavior now simply unbelievable, Gharty admits that he was promoted to shift commander because he knew his time as a detective was nearing the end and the bosses wanted someone they could push around in the spot. In defiance and out of respect for Pembleton’s excellent work as a detective, Gharty secretly permits Pembleton to temporarily re-join the unit and teams him with Det. Tim Bayliss, who had been on an extended leave of absence. Just as Bayliss and Pembleton had been partners for most of the series‘ run, John Munch (who now works at the Special Victims Unit in New York City) is temporarily re-teamed with his old partner, the retired Stanley Bolander. As videographer J. H. Brodie examines video footage of the shooting, the detectives disperse throughout Baltimore, following various leads, some involving the mayoral race and others involving various cases Giardello worked while a lieutenant at Homicide. [Wikipedia] 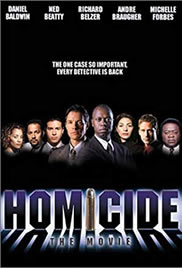