Three unique women embark on a cross-country road trip: Jane (Whoopi Goldberg), a tough lesbian lounge singer in search of a new life after a breakup and getting fired; Holly (Drew Barrymore), a flirtatious pregnant girl escaping her abusive boyfriend; and Robin (Mary-Louise Parker), an uptight real estate agent troubled by her own secrets (namely being infected with HIV).

Robin and Jane cross paths through Robin’s newspaper ad for a traveling companion. Thinking Robin’s a square, Jane initially declines, but agrees to join Robin after her car gets towed. Jane and Robin leave New York City and travel through Pittsburgh to see Jane’s friend Holly. They stumble across a knock out-fight between Holly and her violent boyfriend, Nick, over some missing drugs.

The three women work together against Nick. Impulsively, Holly hits Nick in the head with a bat to stop him from attacking Jane. The women worry about the damage, but he lives. To keep the police from getting involved, they leave him in the home bound to a chair with tape, alive and furious. Hours later, Nick frees himself from the chair, stumbles across the floor, falls and hits his head on the bat and dies. The three unlikely travelers form a special friendship, and after learning that Nick is dead and Holly is pregnant, all decide to continue to California together. 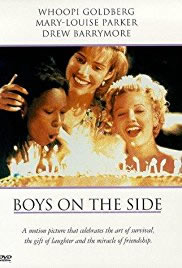