Canal Street is a modern-day thriller telling the story of a teen, Kholi Styles, trying to get by in an unwelcoming new world. After the mysterious death of a classmate, all eyes fall on Kholi, the new kid at his high school. It’s up to his father, Jackie Styles, an up-and-coming lawyer from the slums of Chicago, to defend his son in court and battle an outraged public before time runs out. Jackie fights to keep his faith and prove his son is not the monster the world has made him out to be. 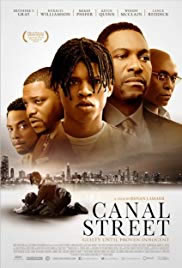