Treme (/trəˈmeɪ/ trə-MAY) is an American television drama series created by David Simon and Eric Overmyer that aired on HBO. The series premiered on April 11, 2010, and concluded on December 29, 2013, comprising four seasons and 36 episodes.

The series takes its name from Tremé, a neighborhood of New Orleans.It begins three months after Hurricane Katrina as the residents, including musicians, chefs, Mardi Gras Indians, and other New Orleanians, try to rebuild their lives, their homes, and their unique culture in the aftermath of the 2005 hurricane.

It received generally favorable reception, particularly for its performances by the cast and musical performers, as well as for its realistic portrayal of New Orleans culture. [Wikipedia] 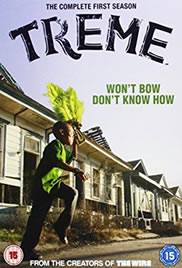