The series stars Taye Diggs as the title character, a lawyer who has to balance his professional career and his love life with having custody of Sarah, his 10-month-old cousin. (His late cousin’s daughter). The season ended on a cliff hanger when the biological mother returned to demand Sarah back.

Although critically acclaimed, Kevin Hill failed to attract sufficient ratings to be renewed after its first season. The series was canceled during a re-organization of UPN programming that occurred in the spring of 2005 as the low-rated network shifted its demographic aim, and because of that, UPN did not renew it for a second season. [Wikipedia] 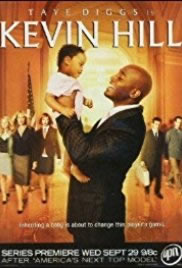