Tommy Riley and his father have just moved to start a new life. Tommy’s father has accumulated many gambling debts but has found a new job that requires him to travel extensively, leaving his son alone at home. Tommy also has a hard time fitting in at school, having crossed gang members. He takes a job at a local diner and enters into a romantic relationship with Dawn, the daughter of the owner, but is jumped by the gang members outside the restaurant. Seeing how well Tommy is able to fight, a local boxing promoter by the name of Pappy Jack offers Tommy a chance to fight in an illegal underground boxing operation. When two men arrive announcing that Tommy’s father owes a large sum of money to pay off gambling debts, Jack convinces his boss, boxing promoter Jimmy Horn to buy out the debt, which forces Tommy to pay off his father’s debts by boxing.

Tommy enjoys a great deal of success and develops a friendship with Romano and Abraham „Lincoln“ Haines, two fellow fighters. However, he continues to be harassed by gang members, and discovers that two of them, „Black Death“ and „Short Cut“ are boxers who fight dirty, using elbows, kicks, knees, and low blows, and counting on the crooked refs to overlook the clear violations. Tommy defeats Black Death in the ring, but Short Cut hides a fluid in his gloves, which he uses to blind Romano during a match. Unable to defend himself, Romano is brutally beaten in the ring and is declared brain dead by the doctors. Short Cut later tries the same trick on Tommy, but Tommy has learned to fight dirty, and defeats Short Cut.

Meanwhile, Lincoln shows signs of possible brain damage and is told to quit fighting for at least 60 days or else suffer permanent brain damage. Despite this, Horn arranges a match between Lincoln and Tommy. Afraid of killing Lincoln, Tommy takes a beating until the two are unwilling to continue the match. In revenge, Horn, a former boxer who retired undefeated, punches Lincoln severely enough to knock him out of the ring.

Furious, Tommy challenges Horn to a match. If Horn wins, Tommy will continue to work for him indefinitely, but if Tommy wins, his father’s debt is wiped clean. Horn accepts on the condition that they fight bare-knuckle. Horn’s vast experience with boxing initially gives him the upper hand, and Horn’s confidence influences him to play with and humiliate Tommy as a result. Tommy eventually uses the various forms of advice he has received throughout his brief boxing experience to outthink Horn: he fakes a broken hand to give Horn even more confidence, and then uses the element of surprise to defeat Horn, freeing himself from Horn’s contract. [Wikipedia] 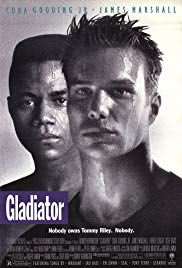