Law & Order: Special Victims Unit (often abbreviated to Law & Order: SVU or just SVU) is an American police procedural, legal, crime drama television series set in New York City, where it is also primarily produced. In the style of the original Law & Order, episodes are often „ripped from the headlines“ or loosely based on real crimes that have received media attention. Created by Dick Wolf, the series premiered on NBC on September 20, 1999, as the second series in Wolf’s successful Law & Order franchise. Law & Order: Special Victims Unit has been nominated for and won numerous awards, including the 2006 Emmy for Outstanding Lead Actress in a Drama Series for Mariska Hargitay, the first, and to date only, Emmy to be received by a regular on any Law & Order series. It is the current longest running scripted non-animated U.S. primetime TV series since the cancellation of the original Law & Order on May 24, 2010 and is the fourth-longest running scripted U.S. primetime TV series on a major broadcast network.

Law & Order: Special Victims Unit originally centered almost exclusively on the detectives of the Special Victims Unit in a fictional version of the 16th Precinct of the New York City Police Department. As the series progressed, additional supporting characters were added as allies of the detectives in the New York County Manhattan District Attorney’s office (known as advisers from the Sex Crimes Bureau) and the Medical Examiner’s office. Certain episodes will go into detail about detectives‘ personal lives and how they may or may not tie into the crimes dealt with during the show. Typical episodes follow the detectives and their colleagues as they investigate and prosecute sexually based offenses, child abuse, and crimes against the elderly. The show starred Christopher Meloni as Detective Elliot Stabler and Mariska Hargitay as Detective Olivia Benson for its first twelve seasons until the former left the cast, unable to come to an agreement on his contract.As of May 23, 2018, Law & Order: Special Victims Unit has aired 434 original episodes.

On May 9, 2018, NBC renewed the series for a twentieth season,which will allow it to tie the flagship Law & Order and Gunsmoke for the longest-running scripted drama in U.S. television history. The season is set to premiere on September 27, 2018. [Wikipedia] 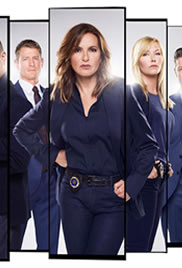