Melinda Gordon (Jennifer Love Hewitt) is a young woman from the town of Grandview, New York, who has the ability to see and communicate with the dead. Melinda lives with her husband, Jim Clancy (David Conrad), and later their son Aiden (Connor Gibbs). She owns a shop called „Same as It Never Was Antiques“. Ghosts seek Melinda’s help in relaying a message or completing a task that will put the spirit to rest, and allow them to cross over into the light. Those who died with unfinished business become earthbound and cannot cross over, and Melinda, as their earthly representative, helps them to find peace. The show does not present the ghosts as having sinned; rather it is the spirits‘ own guilt that condemns them, and their own fear of judgment that keeps them from „crossing over“ into an afterlife. [Wikipedia] 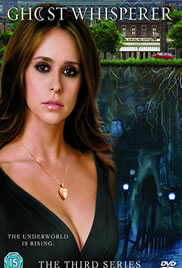