In 1961, a young Abraham Quintanilla and his band „The Dinos“ are rejected by a white restaurant owner for an audition due to their „Whites Only“ policy. They then perform to a Mexican audience at a nightclub called „Lerma’s“, but a riot ensures when they sing „We Belong Together“ and the band is forced to flee.

In 1981, Abraham is married to Marcela Samora and has three children: Abraham III (nicknamed A.B.), Suzette, and Selena (Rebecca Lee Meza). Abraham discovers Selena’s singing talent and decides to create a band called „Selena y los Dinos„, with Selena as the lead singer, A.B. on bass, and Suzette on drums, despite their reluctance. Abraham opens a restaurant called „Papa Gayo’s“ and tells Selena to learn Spanish so she does not have trouble singing in front of Mexicans like he did.

Unfortunately, the Quintanilla family goes bankrupt and loses the restaurant. They move to Corpus Christi, Texas to live with Abraham’s brother. There, Selena performs at a carnival and is poorly received, but one day, while the family is on the beach Marcela hears a song on the radio and teaches Selena a dance called „The Washing Machine“, which helps her and her band become more popular.

In 1990, Selena meets a guitarist named Chris Perez, who after joining the band, develops a friendship with Selena. Abraham disapproves of Chris after his former rock band members trash a hotel suite even though he greatly helped in making music for the band. Chris and Selena’s friendships grows into love and when Abraham catches them hugging before a concert, he fires Chris and threatens a heartbroken Selena that if she follows him, he will disband the Dinos.

Selena and Chris continue seeing other behind Abraham’s back, but soon Selena becomes tired and tells Chris that she wants to marry him right away. Selena and Chris elope secretly, but their marriage soon makes headlines on the radio. Selena goes to see Abraham, who tells her he is glad she did what she did, only wanting what was best for her. Chris is accepted into the Quintanilla family and returns to being the guitarist for Los Dinos.

During one of Selena’s live performances, Jose Behar (the head of EMI Latin) and his music associates tell Abraham that they want to make an English language album for Selena. Soon, Selena opens her first boutique called „Selena Etc.“, which her fan-club president Yolanda Saldivar manages, and her album Selena Live! wins a Grammy Award for Best Mexican-American album. As 1995 begins, she starts recording her Crossover Album and Saldivar gives her a friendship ring, lying that it was only from her. 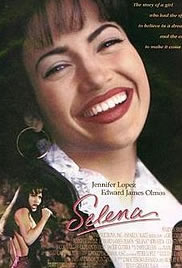