Each episode of The Closer deals with an aspect of the Los Angeles culture as it interfaces with law enforcement in the megacity. The show deals with complex and subtle issues of public policy, ethics, personal integrity, and questions of good and evil. The rather large character ensemble explores the human condition, touching on individual faiths, traditional religious influences in the lives and communities of contemporary society, and the breakdown and dysfunction of family systems, work teaming, and government responsibility.[citation needed] The first season began with Brenda Leigh Johnson arriving at the LAPD to lead the Priority Murder Squad (PMS), quickly renamed Priority Homicide Division (PHD), a team that originally dealt solely with high-profile murder cases (Seasons 1–4).
During Season 4 an embarrassing tangle with the press, over just what were the criteria making a homicide a priority, allowed Brenda to manipulate circumstances so that the division was reorganized into a much larger Major Crimes Division with a wider scope,[note 1] though the majority of plots still involved and focused on homicides. Most importantly to the show’s plot lines, Commander Taylor’s role was also changed from „rival and in-house adversary“ to that of „unambiguously loyal subordinate“, so that he was thereafter reporting directly to Deputy Chief Johnson and noticeably helpful as he coordinates interaction between the MCD and other units.
Season five introduced Mary McDonnell as Captain Sharon Raydor of the Force Investigations Division. Raydor and Johnson start out as rivals, but gradually they develop grudging respect for each other and form an uneasy alliance. McDonnell as Raydor went on to star in The Closer’s spin-off, Major Crimes.
During the final season, Brenda finds herself in civil legal difficulties as a result of the events in „War Zone“ (Season 6, Episode 8), and the LAPD concludes that there must be a disloyal subordinate generating information leaks from within MCD. Taylor and Raydor take an active role in attempting to combat the leaker and the legal matters do not reach a final resolution until the series‘ end, in the episode „The Last Word“.
On December 10, 2010, TNT announced that the seventh season of The Closer, which began production in the spring of 2011, would be the last. The channel said that the decision to retire the show was made by Kyra Sedgwick. On January 30, 2011, the media announced that the final season would add six episodes to the usual fifteen episode order, building toward the spin-off series, Major Crimes. [Wikipedia] 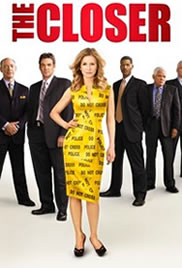