Annabeth Chase is a criminal prosecutor with a near perfect conviction record. Throughout the series, she lost only three cases. In Season 1, Episode 21 „David and Goliath“, Chase tried a case against a professional baseball player, who killed his pregnant girlfriend. His not guilty verdict was attributed to his fame. Chase lost the case of a man prosecuted for a rape he committed 11 years prior, in Season 2, Episode 18, „Making Amends.“ In this case the victim was unable to recall the assault, as she unknowingly ingested Rohypnol, known as „The Date Rape Drug“, which causes amnesia. In Season 2, Episode 21, „Drink the Cup“, Chase was unable to convict a corrupt cop named Veeder of the murder of a fellow police officer. In the following episode she successfully tried Veeder for the murder of a young girl he exploited.

She is married to a construction worker, Jack Chase (Christian Kane), and has an infant daughter, Hailey Chase. The show revolves around her balancing her career and family life, as a prosecutor in the city of Indianapolis.

Annabeth returns to work four months after her husband was killed by a drunk driver on the first-season finale. Annabeth’s coming to terms with her husband’s death, her grief, and her struggle to return to normalcy, coupled with the guilt and trials of being a single parent, are recurring themes throughout the season.

Annabeth and Maureen also face a new boss, Chief Deputy Prosecutor James Conlon (David James Elliott), who has just arrived from New York, and whose methods appear to the two prosecutors to be too forceful and sometimes unethical.

Near the end of the season, Conlon attempts an attorney general campaign which is derailed as police corruption is discovered, resulting in several prosecutions. Scofield is assassinated as a result of these prosecutions. The season (and series) ends with Chase successfully prosecuting Scofield’s assassin. [Wikipedia] 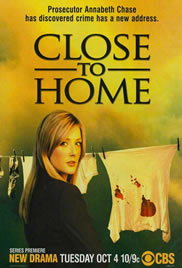