Undisputed heavyweight boxing champion George „Iceman“ Chambers (Rhames) is convicted of rape and sentenced to a new prison in the desert, called Sweetwater. The high-security facility is populated by hardened criminals. Unaware of the prison’s ways and its unique hierarchy, the pompous and bratty Chambers tries to impress upon the inmates his status as a champion boxer.

The prison camp, within its own walls, has a riveting competition on which a betting syndicate thrives. Criminals fight in boxing matches with very lax rules, thus making it a very addictive and lucrative venture for the syndicate. The most popular boxer behind bars is Sweetwater’s undefeated Monroe Hutchens (Snipes), who ends up in solitary confinement after Chambers picks a fight with him in the mess hall.

Sensing the brewing hatred for the heavyweight champion, an incarcerated mob boss named Ripstein (Falk) senses potential in a match between the modest Hutchens and the egomaniacal Chambers. Ripstein, a lifelong boxing fan, proposes a match and the warden (Arndt) is persuaded to look the other way.

As all the arrangements are finally organized, an eagerly awaited fight night arrives. All hell breaks loose with the haughty professional champ going all out against the unputdownable prison warrior. Chambers knocks down Hutchens twice (and with the ‚London Prize‘ format, each knockdown counts as the end of a round, as the boxer is given only 60 seconds to get up.) In the third round, Hutchens charges back and knocks Chambers down for the first time in his career, sending the crowd of prisoners into a frenzy. Finally, in the fourth round Hutchens officially KO’s Chambers to become the undisputed champion. [Wikipedia] 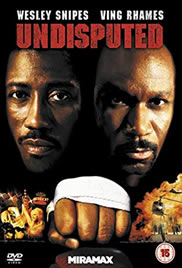