The Pacific is a 2010 American television series produced by HBO, Playtone, and DreamWorks that premiered in the United States on March 14, 2010.
The series is a companion piece to the 2001 miniseries Bandof Brothers and focuses on the United States Marine Corps‘ actions in the Pacific Theater of Operations within the wider Pacific War. Whereas Band of Brothers followed the men of Easy Company of the 506th Parachute Infantry Regiment through the European Theater, The Pacific centers on the experiences of three Marines (Robert Leckie, Eugene Sledge, and John Basilone) who were all in different regiments (1st, 5th, and 7th, respectively) of the 1st Marine Division.
The Pacific was spearheaded by Bruce C. McKenna (co-executive producer), one of the main writers on Band of Brothers. Hugh Ambrose, the son of Band of Brothers author Stephen Ambrose, served as a project consultant.
The Pacific miniseries features the 1st Marine Division’s battles in the Pacific, such as Guadalcanal, Cape Gloucester, Peleliu, and Okinawa, as well as Basilone’s involvement in the Battle of Iwo Jima. It is based primarily on the memoirs of two U.S. Marines: With the Old Breed: At Peleliu and Okinawa by Eugene Sledge and Helmet for My Pillow by Robert Leckie. It also draws on Sledge’s memoir China Marineand Red Blood, Black Sand, the memoir of Chuck Tatum, a Marine who fought alongside Basilone on Iwo Jima. [IMDB] 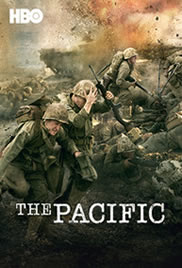